of ARAGON and NAVARRA, CONSTANÇA (CONSTANCE)

You are here: Home / Frankish-Catalan Sicily and Greece / of ARAGON and NAVARRA, CONSTANÇA (CONSTANCE)

of ARAGON and NAVARRA, CONSTANÇA (CONSTANCE).

Her father, Pere el Cerimoniós, was son of the earls of Urgell, Alfons el Benigne (1299-1336) and Teresa d’Entença (ca. 1301-1327). He ruled over more than fifty years which were full of conflicts and big changes. The obsession of this sovereign to preserve the dignity and the power of the House of Aragon should be noted (CINGOLANI, 2007). That is why he needed to collect writings, ordinances, books, tombs, relics, artworks and other items with the clear intention of “venerating his dynasty and his person”.

She married the king of the Catalan-Aragonese crown in July 1338 in Alagón (Aragón), when she was not yet twelve years old. She brought with herself all the traditions and the world of the French court. She was in her early twenties and mother of four children when she died. We have few details of her short life, but it should be remembered that the Book of Hours of Maria de Navarra is named after her. This book was commissioned by Pere el Cerimoniós to the workshop of Ferrer Bassa. At the present time, it is guarded at the Biblioteca Nazionale Marciana of Venice.

In 1347 Constança was proclaimed legitimate heir to the Crown of Aragon, with the consequent protest of the king’s brother, Jaume d’Urgell (ca. 1320-1347), and the clashes with the Unions (Aragon and Valencia). The problem was solved with the birth of a male heir, the future Joan I (1350-1396), son of the third wife of Pere el Cerimoniós, Leonor of Sicily (ca. 1325-1375). From this moment, Queen Leonor, described as the “splendid and machiavellian night queen” (SCIASCIA, 2010/12), negotiated the marriage of her brother Luis the Child, king of Sicily, with the Infanta Constança in order to maintain and reaffirm an alliance with the island kingdom.

We know little about Constança’s childhood, but we can imagine her in close relation with her sisters. Apparently, she was of delicate complexion since, during her first year of life, her mother commissioned some images to be delivered as votive offerings to the Montserrat monastery and the Santa Eulalia chapel. The only direct reference to her family life in the Crònica of Pere el Cerimoniós (SOLDEVILA, 2014) is the trip of his wife Maria and his daughters Constança and Joana from Barcelona to Perpignan in December 1344. He says: “Dimecres, a vint-e-dos de desembre de propdit, nós estant a Perpenyà, venc la reina dona Maria, muller nostra, ab les infantes Na Constança e Na Joana, filles nostres, de les parts de Barcelona”. Constança was already two years old and Joana was in her second month of life.

Among the writings and letters of Pere el Cerimoniós preserved at the Arxiu de la Corona d’Aragó, some help us to know the relationship that the monarch had with his daughters*. For instance, in 1350, the king ordered his daughters Constança and Joana to dress in mourning after the death of their grandmother, Joana de Navarra (ACA, reg. 1133, f. 26r). Shortly thereafter, the monarch refused to give permission to his daughters to attend the coronation of the king of Navarra on June 27, 1350 (ACA, reg. 1134, f. 37r-v); he writes as follows:

A few days later, on April 19, 1350, in another record (ACA, reg. 1134, f. 44v), the king summons his daughters to meet in Tarragona and follow him to Poblet for the transfer of the corpse of their mother Maria de Navarra.

We also have a letter of the “Cerimoniós” addressed to his uncle, Pere de Ribagorça and Muntanyes de Prades, dated on April 1354, asking for advice on the marriage project between his daughter Constança and the King of Sicily. He tells him that as her guardian, he begs him that “porti totes les joy[e]s de la dita infanta, per tal que, si finarem de fer lo dit matrimoni, que no calla laguiar per aquellas.” (ACA, reg. 1067, f. 90r). According to the will of Maria de Navarra, the princesses were to come under the tutelage of Pere de Ribagorça when her husband remarried.

The court of the infantas lived on the income that came from the maternal legacy and the allowances that the king stipulated and, it seems, they never arrived on time. So, continuous loans had to be processed to cover the day to day costs. In a note from the Arxiu Històric de Protocols de Barcelona, year 1359, (AHPB, 23/8, f. 62r 17-4-1359), it is stated that both princesses had to pawn their crowns in Perpignan to maintain their court.

The infantas’ court was constantly moving (Barcelona, Perpignan, Huesca, Lleida, Montblanc, Tarragona, València, etc.), often following the queen or king’s movements due to change of residence. One of the places, where they probably made a brief stay, was the residence of the last wife of their great grandfather, Queen Elisenda of Montcada (1292-1364), since she was the godmother of princess Joana. In those years, Queen Elisenda lived in the palace of the monastery of Pedralbes (Barcelona), where the Sant Miquel’s cell had already been painted with the frescoes of Ferrer Bassa’s workshop.

We know little about the relationship between Constança and her stepmother, Elionor of Sicily, except for some commissions of costumes and gifts for the princesses. Aiming the control over the kingdom of Sicily, after many negotiations and arduous machinations, in 1354, the marriage agreement was signed between Constança and Lluís I the Child of Sicily (1337-1355). On his death, the agreement passed to his little brother, Frederic IV (III) the Simple (1342-1377). And finally, on September 21, 1356, in Perpignan, the matrimonial agreement was signed, but it was not until April 15, 1361, that the wedding took place in Catania (Sicily), after circumventing the surveillance of the Sicilian nobles who wanted to avoid this union.

During the few years that she was queen of Sicily, the Constança’s Court, or Càmera règinale di Costanza, was active under the regulation of the Ordinacions sobre lo regiment de tots los officials de la sua cort, of Pere el Cerimoniós, of 1344. This court met in Castle Ursino in Catania or in Castle Maniace in Siracusa until the death of the queen. Among the documents still preserved, we should remark a note from the Curia, kept in the Arxiu de la Corona d’Aragó (MR, 472, f. 17v.), in which the queen commissioned artworks by the painter Jaume Serra from Barcelona (AGNELLO, 2005). Whether an altarpiece or paint from the Serra brothers arrived in Sicily during her brief reign or not is unknown.

She was queen of the insular Sicily during little more than two years, from 1361 to 1363, but the sumptuousness of the set of objects that she possibly brought to her marriage had to be of great value (SANTORO, 2007). She was buried in the Catania’s cathedral in a marble sarcophagus of which it is believed that only remains the cover or gisant. It is the tomb known as “Sarcofago di Costanza di Aragona” preserved at the Chapel of la Madonna at Catania’s cathedral.

* I appreciate the collaboration of Stefano Maria Cingolani.

Inscription above the coat of arms of The Kingdom of Sicily (left wall of the main apse of Catania’s cathedral, until 1952). 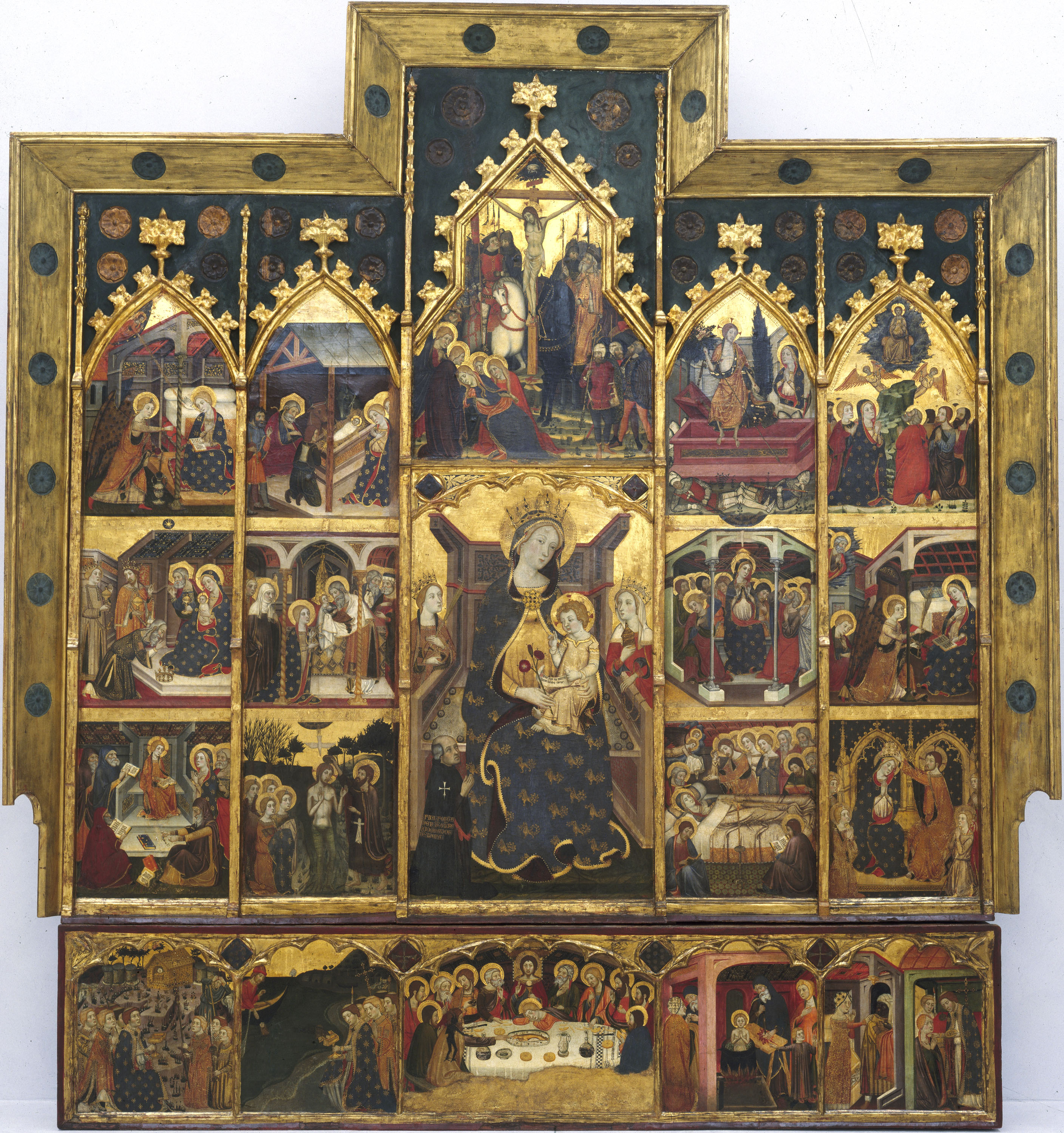 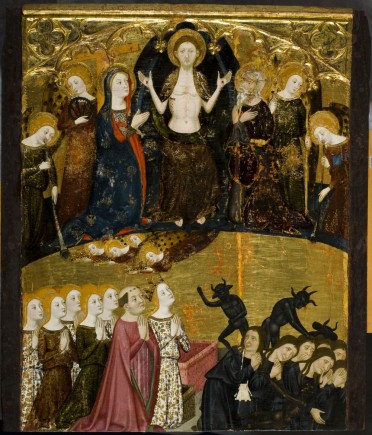 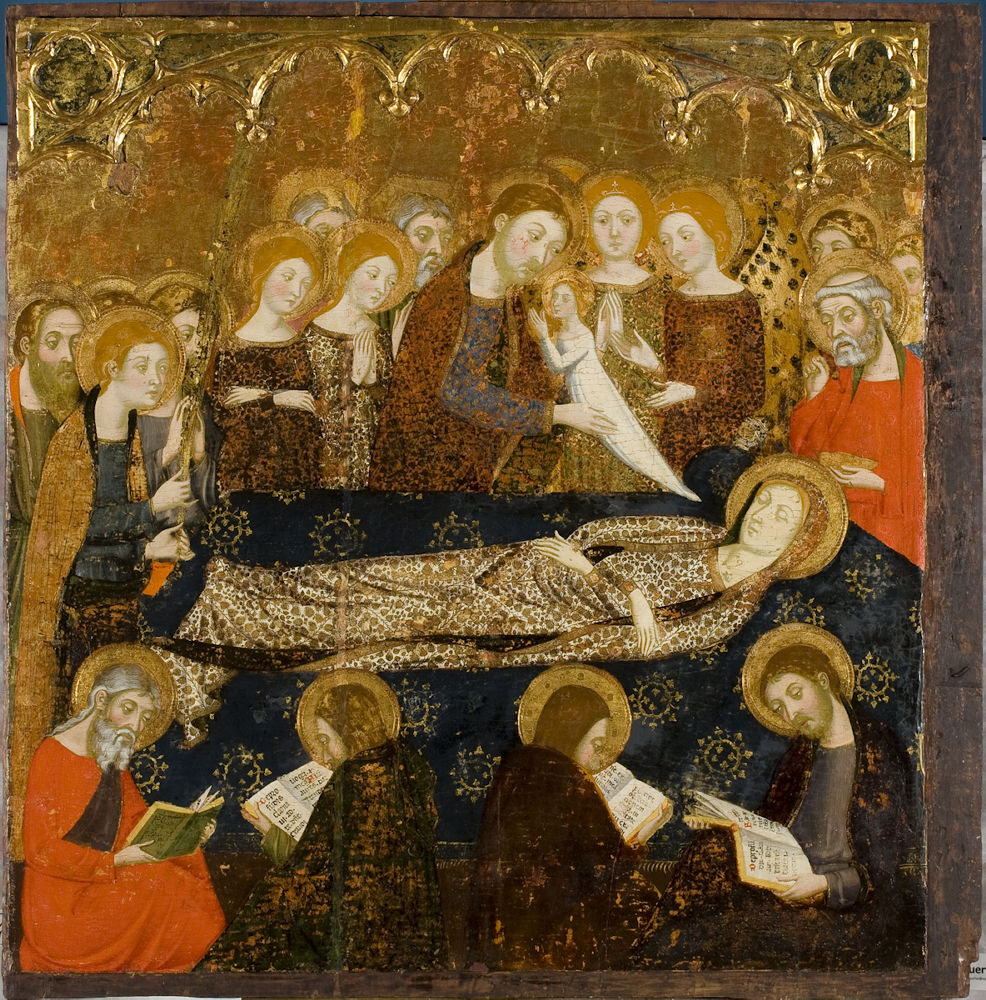 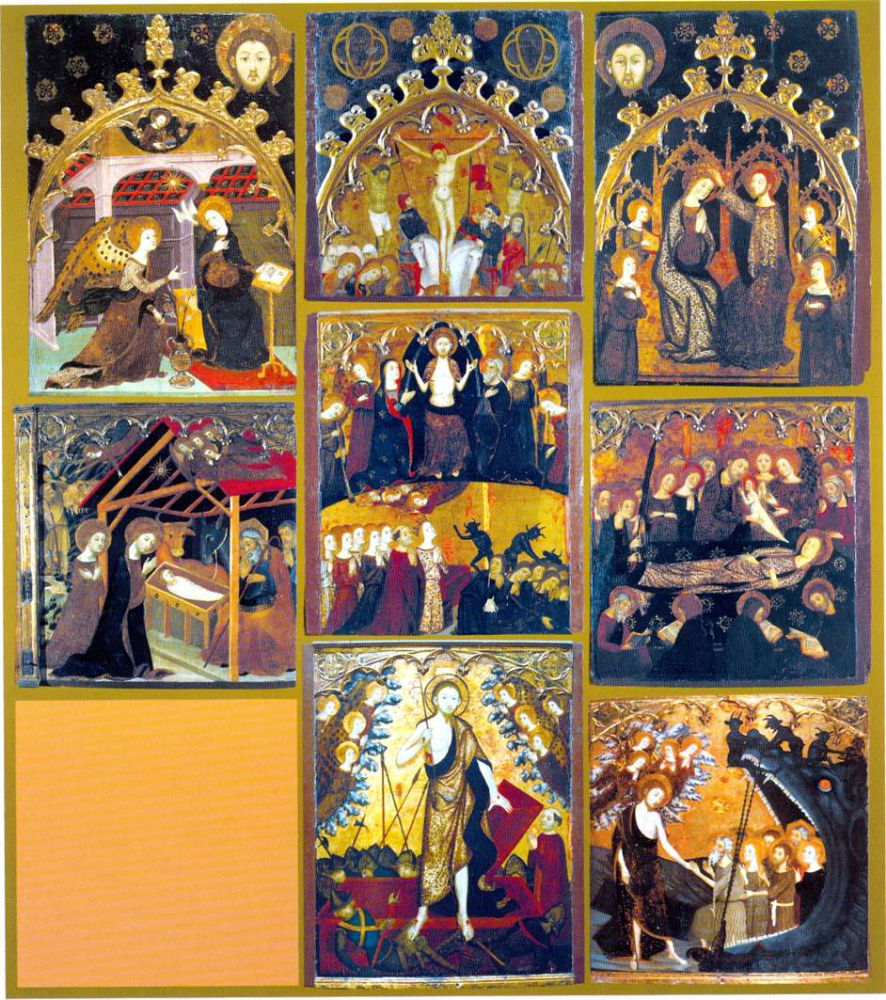 Coffin of the sarcophagus of the queen Maria of Sicily