Cover of the sarcophagus of Constança of Aragon and Navarra

You are here: Home / Frankish-Catalan Sicily and Greece / Cover of the sarcophagus of Constança of Aragon and Navarra

Cover of the sarcophagus of Constança of Aragon and Navarra, queen of Sicily (r. 1361-1363)

Description of the monument

It is a pitched cover measuring 214 × 65 × 30 cm. The slanted slab where the figure of the queen rests is 49 cm wide with a slight angle of inclination, that leads us to think that the original monument should not have been at a great height. The figure is about two meters long from the pillow to what remains of the dog at the foot. Of all sculptural work, only about 10% is kept in a minimally acceptable state.

The queen rests her head on a heraldic cushion decorated with plant motifs showing the three coats of arms of her three lineages: maternal, paternal and that of her husband. There is a row of shields on each side of the cushion. At the part closest to the body, we seehe diamonds and the chains of Navarra, at the centre, the bars of Aragon, and in the farthest corners the coat of arms from the Aragonese dynasty of the Sicilian Kings. It’s a big cushion that inspires comfort. The face of the head resting on the cushion has not been damaged, but the forehead has been broken to remove the crown, which was probably made of metal and fixed by two holes in the temples. What could be abundant hair is gathered under a veil or gandalla.

The anonymous sculptor of this piece has managed to transmit all the dignity of a great character, even when the only part that has not been destroyed by the hammer blows is her face. The young queen has her eyes closed with prominent eye sockets. The ocular space is surrounded by eyebrows that come out from a large and straight nose, which make us think of some altarpieces by the Serra brothers and the images found at Sant Miquel chapel in Pedralbes.  The thin lips draw a semi-closed mouth that finishes in round and shiny cheeks. The chin has a hole that gives her a nice and almost smiling look. The neck, deformed and exaggerated does not fit the face. It might have been covered by a rich scarf.

The reclining statue is dressed with a wide royal robe, possibly a gonela and a princely mantle that covers her entire body. Her hands are crossed on her belly and in her left hand, which is under the other, we can see well-formed and straight fingers finished in small round nails. These are young hands. The forearms are covered with sleeves tightened with a row of buttons. From her shoulders hangs her cape trimmed with a diamond-cut bead, with decorative borders, that seems to be fastened at the height of her heart with a brooch.  It is impossible to be sure if the queen is dressed in a splendid dalmatic or with a bordered cape (AYMERICH, 2018). The feet, covered in folds of clothing, rest on what remains of a dog puppy.

According to historian Roberta Carchiolo, the coffin and the “gisant”, today joined in a single sarcophagus, must have originally belonged to two different tombs. The lying figure of the deceased represents the daughter of “el Cerimoniós”: “Costanza Perez di Aragona e Navarra” (CARCHIOLO, 2015). While in fact, in my opinion, the coffin of the Constança’s sarcophagus was conceived to contain the remains of Maria of Sicily (ca. 1362 –1401), her daughter, when she was transferred from Lentini to Catania (Vid. SARCÒFAG de Maria de Sicília). Intuition shared with professor Laura Sciascia (2012) and Paola Vitolo, who exposed in the Convegno internazionale, Catania 2017, that “il coperchi è da riferire alla sepoltura di Costanza, la cassa doveva provenire invece dalla tomba di sua figlia Maria” (VITOLO, 2018).

When the tomb was opened, in late 1958, a lead tube was found inside, with a parchment confirming that the person buried was: “CONSTANTIA REGINA (…)”. Among the scattered bones and scraps of clothing was a skull in good condition (REALE, 1983). This disorder was probably due to the tomb recognition of 1605 and the subsequent transfer of the sarcophagus to the central apse of the cathedral. The monument where Constança was originally buried could have been placed near the crypt dedicated to the Catania’s patron saint, Saint Agate (VITOLO, 2018).

By 1597, the new wooden cathedral’s choir made by Scipione de Guido (1590) had already been installed, and the walls of the presbytery were decorated with the frescoes of Giovanni Battista Corradini (1572? –1659). That same year, the senate of Catania made a record confirming the authorization from Palermo to relocate the tombs of Frederic II/III, son of Pere el Gran, and queen Constança above the choir stalls. The authorization was signed by the viceroy D. Giovanni Ventimiglia (1559–1619). At that time, the regrouping of the remains of the family of king Frederic II/III (†1337) might have been brought together into his great “Sidamara” type paleochristian sarcophagus which is today located at the Madonna’s Chapel. Inside are the remains of the king himself, his son Giovanni di Randazzo (†1348), his grandson Lluís I (†1355), his great granddaughter Maria I (†1402) and her son, Pere or Frederic (†1400). This tomb was embedded in the right wall, just in front of the queen’s one. It is believed that in order to fix the lime and the stucco intended to cover them, both sarcophagi were hit and broken. Nothing was known how the hidden sarcophagi were, but in the Decachordum of 1642, Io. Baptista De Grossis (1605 –1666) assured that behind the epigraphic texts were the remains of the referred people.

Before the finding of the tombs, in an article published by 1918 in “Il Monserrato” magazine, the writer Gaetano Ardizzoni (1837–1924) predicted that what could be below the epigraphic texts of the pseudo tombs of the presbytery could not be anything remarkable because some fragments that he identified as pieces from the previous tombs were preserved in the museum Castello Ursino (ARDIZZONI, 1918).

In May 1952, in the course of an important restoration work to return the Norman cathedral to its original appearance, several holes were performed in the baroque protrusions of the royal tombs. On Sunday May 11, the newspaper Giornale dell’Isola of Catania published the news of the discovery of the two sarcophagi embedded in the wall of the main apse. In subsequent articles and publications, professor Guido Libertini urged to remove the tombs in order to study them.

From May 30, 1957 onwards, the cathedral was closed to continue the archaeological excavations and to install guides in the floor of the cathedral that would allow the extraction of the tombs from the thick Norman walls. Some months later the sarcophagi were lowered from the wall, and on October 1, 1958, with the presence of the authorities, the marble covers of the two tombs were raised and the interior analysed.

Since the discovery in 1952, the tomb of Constança has been mentioned y different scholars without being able to determine his paternity. Before it was taken off the wall, the archaeologist Guido Libertini (1888–1953) already described it as an important iconographic document of the mother of queen Maria and specified that it could be the work of the disciples of Tino da Camaino (1280–1336) or of some sculptors from northern Italy or from Sicily itself (LIBERTINI, 1952). On those same dates the duke Francesco Paternò Castello (1893–1982) erroneously concluded that, in view of the cushion’s shields, the gisant would have been ordered during the years that Blanca of Navarre (1385–1441), the second wife of Martí el Jove, acted as lieutenant of the island since the dead of her husband, from 1402 to 1413 (PATERNÒ CASTELLO, 1952).

The great medieval art scholar Stefano Bottari (1907–1967), in an extensive work on this grave concludes that it would be one of the few works belonging to the French gothic in Sicily. As a result of the close relationship between the bishopric of Catania and the Papal court of Avignon (BOTTARI, 1954).

Recently, professor Roberta Carchiolo has published that the Sicilian court was directly influenced by the Avignon Popes – Gregori XI- through the bishops of Catania Marziale and Elia di Vaudron, both natives from Llemotges, who were the ones who commissioned the reliquary bust of Saint Agate (1376) to Giovanni di Bartolo (Siena not. 1364 – 1404). Her discussion continues saying that we would be in front of a sculpture that could have come from a local workshop related with Goro di Gregorio (Siena, mid-fourteenth century), who worked in Messina, or with Nino Pisano (Pisa, not. 1343–1368 ca.) who during the 60s was working in the sanctuary of l’Annunziata in Trapani. She concludes saying that the little remains of this work does not allow us to name its author, only to say that it belongs to the artistic movements that spread throughout Tuscany, France, Naples and Sicily. She says that the delicacy contrasts with the hard design of the eyelids (CARCHIOLO, 2015). It is not known what the funerary monument dedicated to the queen would look like, but at the end of the 16th century it was located “presso l’altare da lei stessa istituito nell’area tra l’abside maggiore e quello meridionale, che era dedicato a sant’Agata, e che ancora oggi custodisce le reliquie della santa” (VITOLO, 2018).

Without any documentary basis, I would say, this monument would be the result of a commission imposed by Elionor of Sicily to her brother Frederic the Simple, husband of Constança, to further strengthen the ties between the Crown of Aragon and the insular kingdom of Sicily. The Cerimoniós, with his propaganda obsession, could have suggested this image where his lineage was reflected, according to the popular sepulchral works of that time. In any case, it is plausible that the cover of the tomb of Constança was the work of one of the workshops that, at the end of the 14th century, worked directly for the House of Barcelona.

Inscription above the coat of arms of The Kingdom of Sicily (left wall of the main apse of the Catania’s cathedral, until 1952). 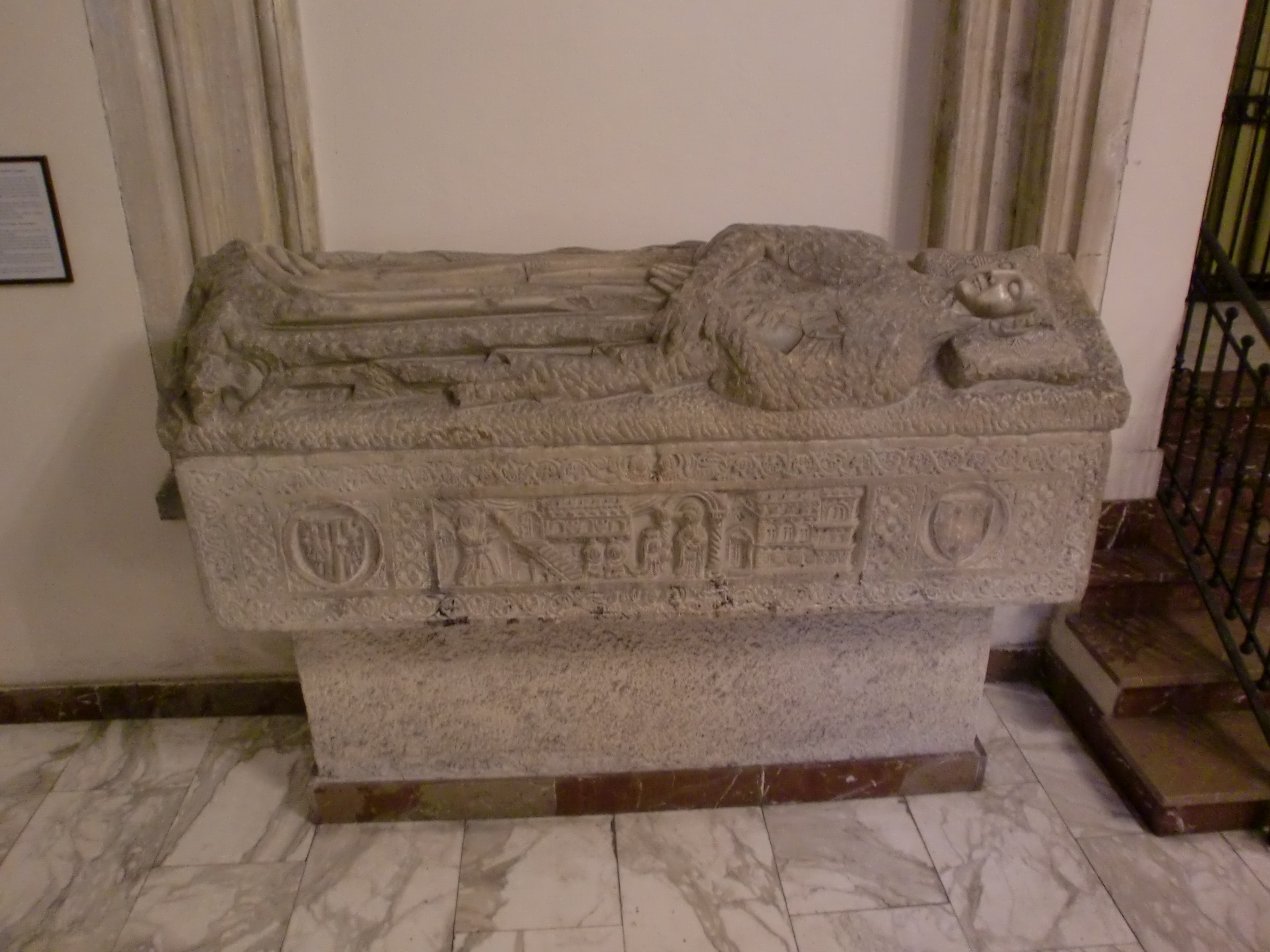 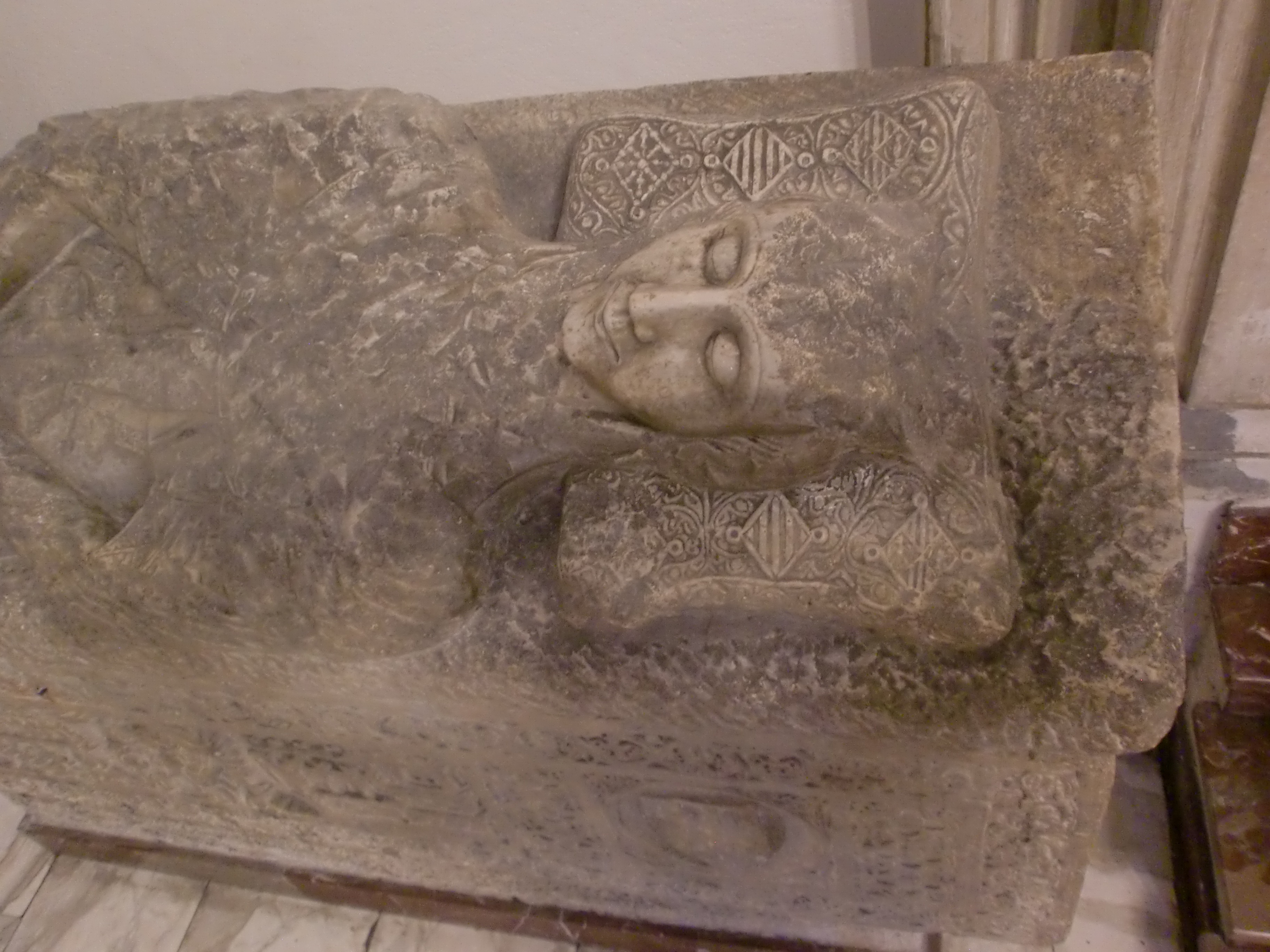 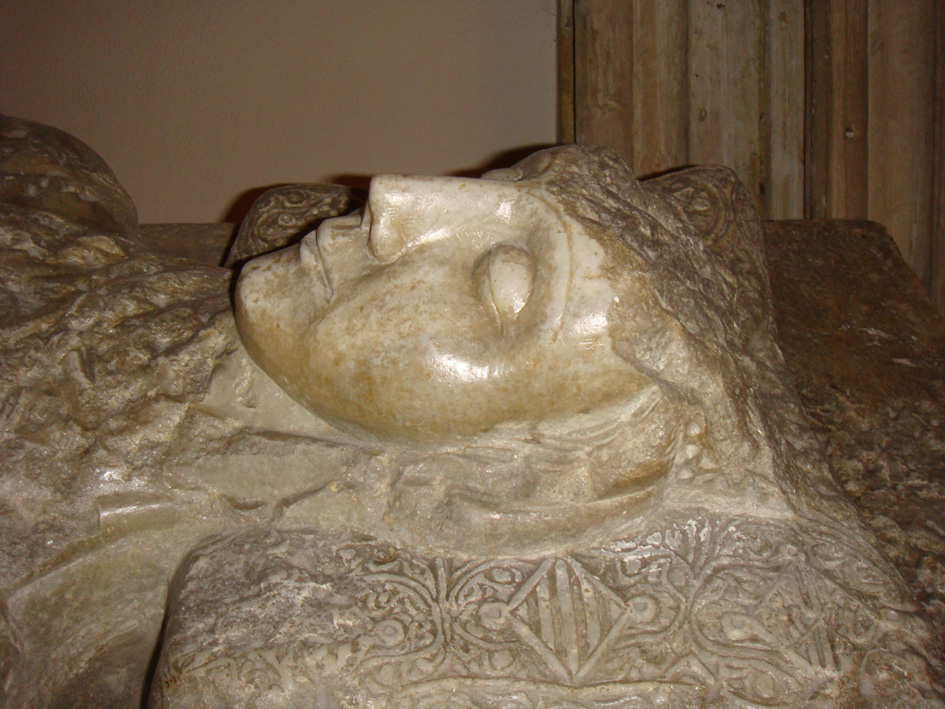 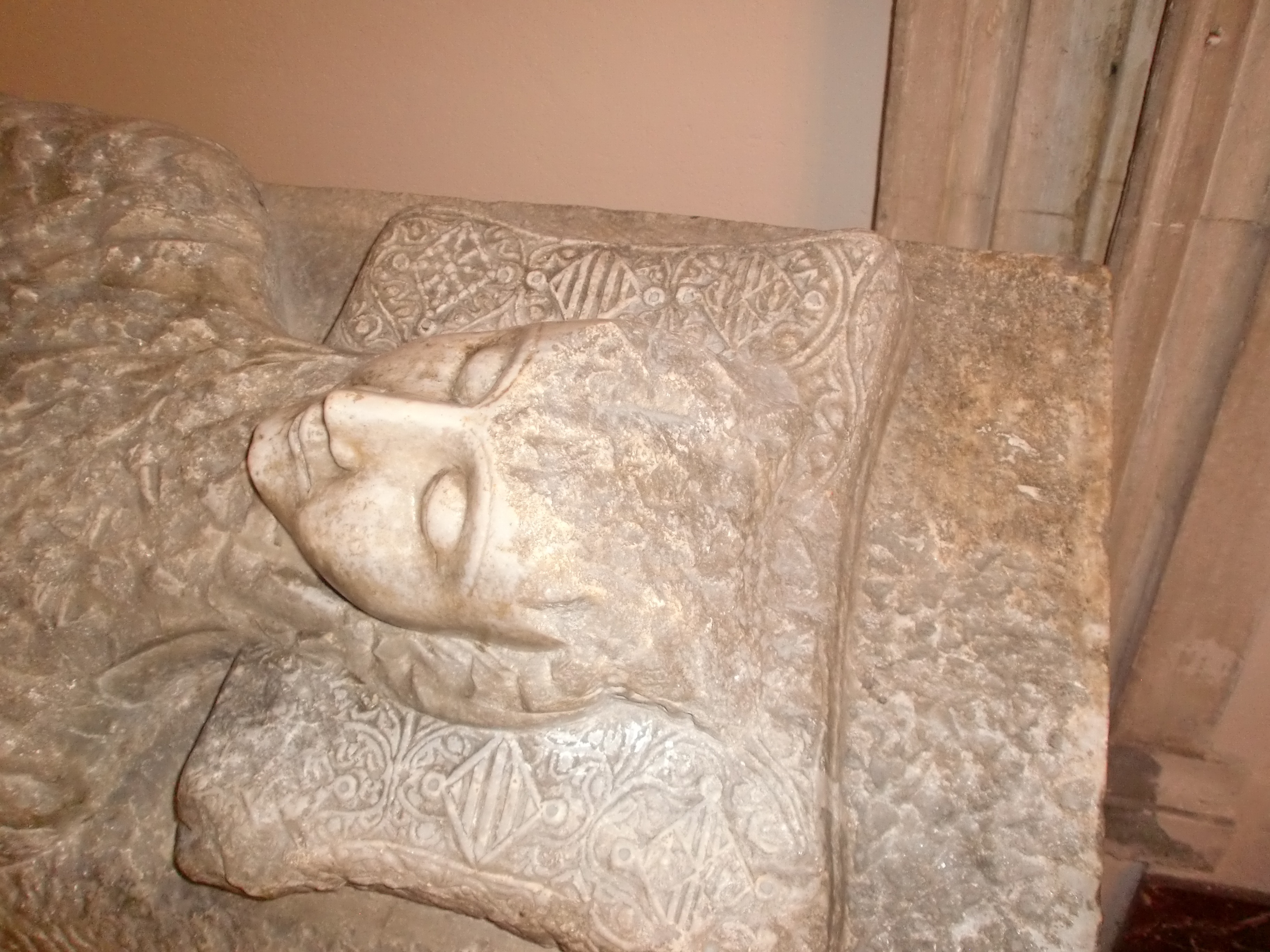 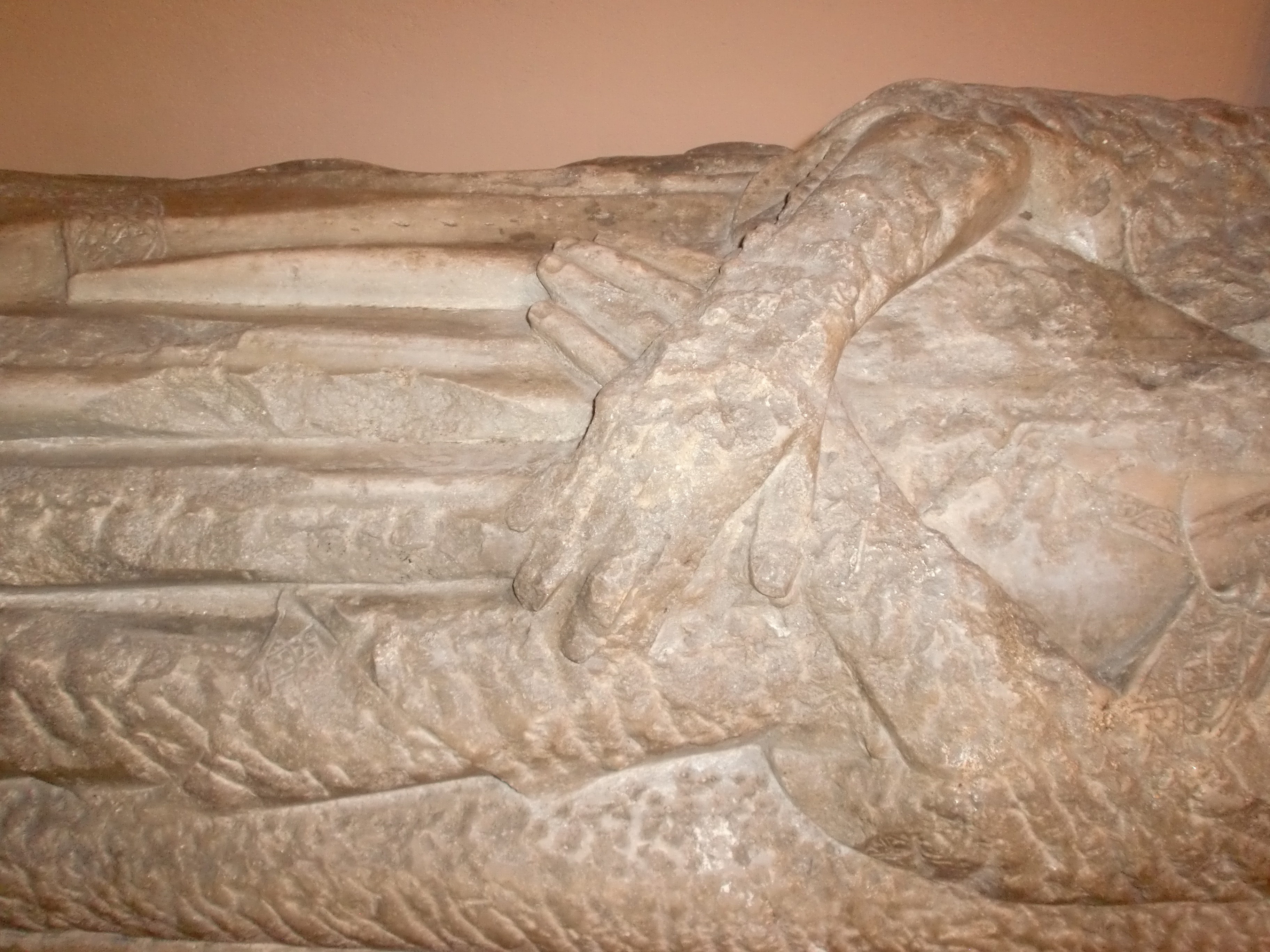 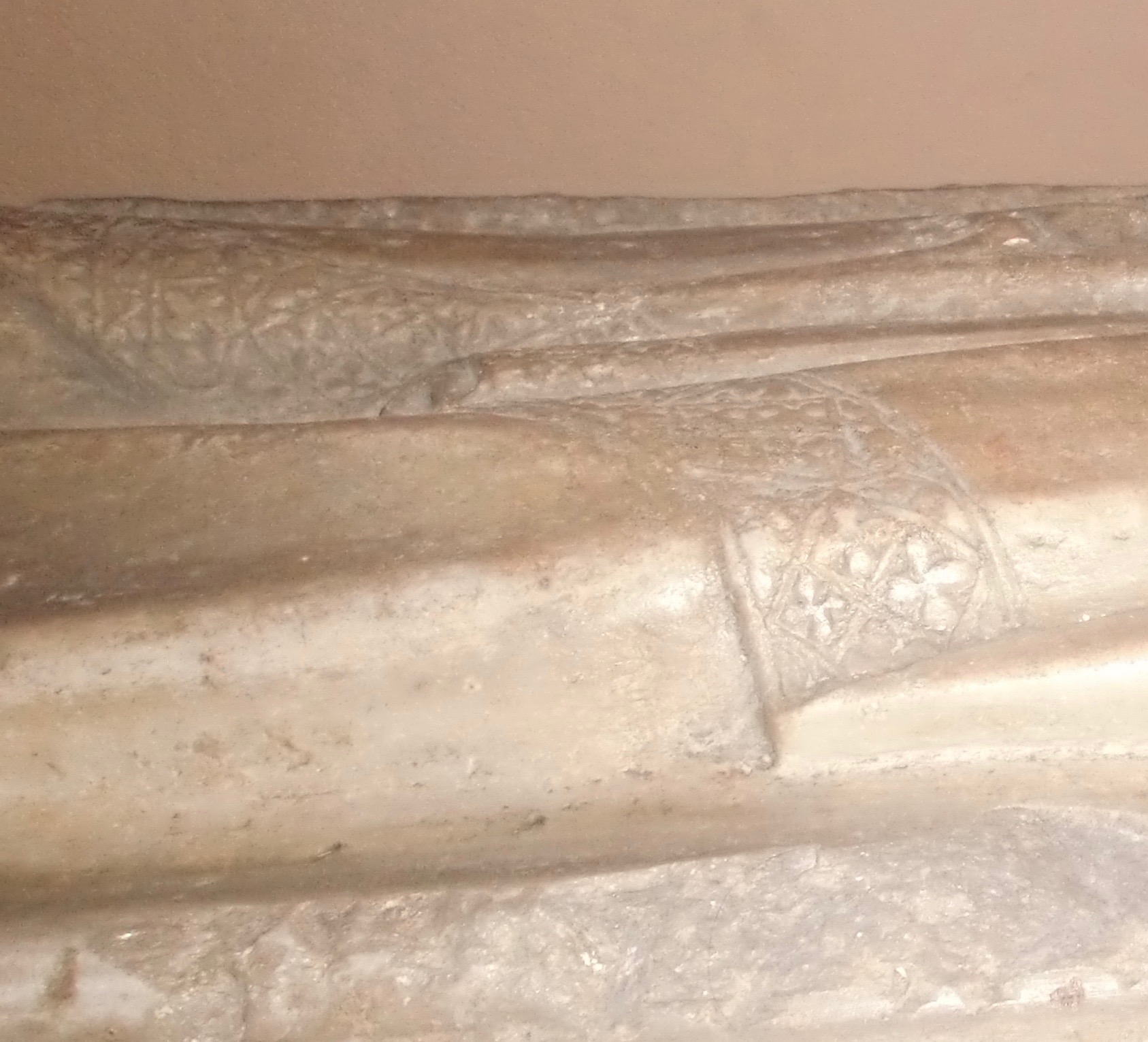 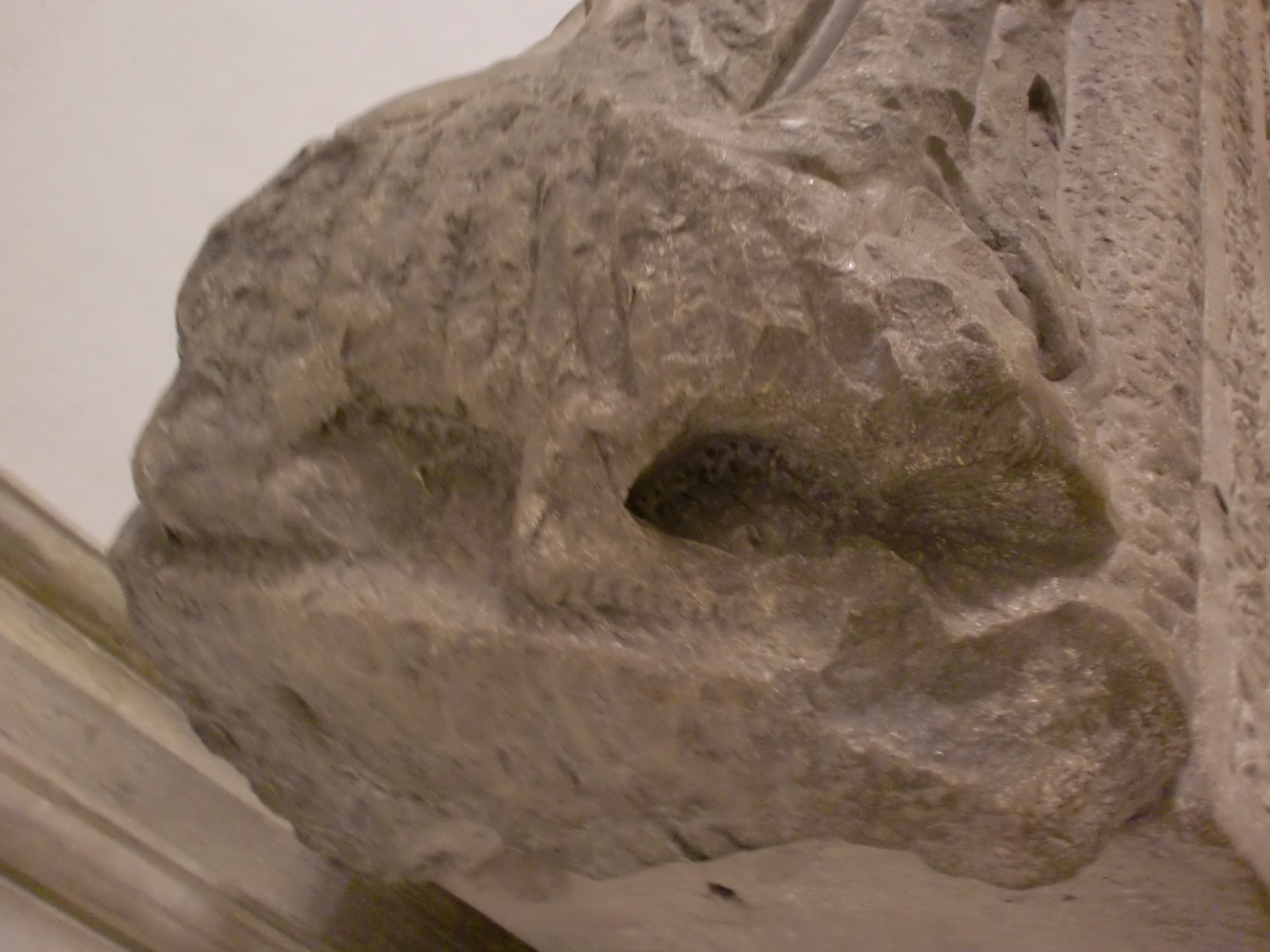 Pictures of: Pilar Viladomiu.
of ARAGON and NAVARRA, CONSTANÇA (CONSTANCE)

of SICILY and ARAGON, MARIA
Scroll to top