of SICILY and ARAGON, MARIA

You are here: Home / Frankish-Catalan Sicily and Greece / of SICILY and ARAGON, MARIA

A few days after her birth, in view of problems with the barons and the claims of the Crown of Aragon, king Frederic swore to the barons his loyalty to the princess as successor to the kingdom of Sicily.

When she was less than one year her mother died and came under the tutelage of her godfather Artal d’Alagó (†1389), supporter of the catalan faction. She lived closely with the clashes of the different factions and the negotiations on the vassalage of the island with the Papacy and the Kingdom of Naples. On August 20, 1372, under the tutelage of Pope Gregory XI (last Avignonese pope, 1370-1378), her father signed the Peace of Catania or Avignon Treaty. Among other agreements, he accepted the title of King of Trinacria -vassal of the Pope and the queen Joana I of Naples-, the succession of princess Maria if there were no male heirs, and his marriage with Antònia dels Baus, a Napolitan court noble. The question with the papacy about Sicily ended that way, and an understanding was reached with the Anjou.

As early as 1370, regarding the multiple marriage negotiations that had been debated, it was proposed a double marriage with the Visconti Branch: that of King Frederic with a daughter of Bernabó Visconti and that of princess Maria with a son of the same Lord of Milan. But this proposal was immediately rejected by Pere el Cerimoniós and Pope Gregory XI, who threatened not to ratify the peace with Naples. This possibility again arises after the death of his second wife. And, this time, in February 1377, the marriage between the king and Antonia Visconti was signed, but it did not come to happen due to the death of king Frederic in Messina on July 27, 1377.

Therefore, at the age of fourteen, she succeeded her father as Maria Dei gratia regina Sicilie et Athenarum ac Neopatria ducissa (r. 1377–1401), but the government was exercised by her guardian and vicar of the island Artal d’Alagó. In the face of the conflicts with the barons, the government was entrusted to four vicars – Artal himself, Manfredo Chiaramonte, Guillem of Peralta and Francesco Ventimiglia- two of each faction, Catalan and Latin. Thus, the island was divided between these four great families, and we can say that the queen remained as a captive of her guardian in Ursino castle, in Catania (QUATRIGLIO 1985).

In Catalonia, in the autumn of 1378, the wife of prince Joan, first-born of the Crown of Aragon and Duke of Girona, died. Immediately, el Cerimoniós, proposed him as his granddaughter’s husband and activated all the appropriate protocols. The problem seemed solved when the consent of the vicars of Trinacria arrived by the spring of 1380, but Joan, who had always opposed this marriage which he considered almost incestuous, announced his own engagement with the daughter of the duke of Bar. Pere el Cerimoniós had to find another strategy and a new candidate for Maria of Sicily.

The third wife of el Cerimoniós, Queen Elionor (†1375), had named their second son, Infant Martí, as heir to her rights to the crown of Sicily, so el Cerimoniós proposed Martí’s son, who was four years old, as the future husband of his Sicilian granddaughter, who was already eighteen. The agreement was signed on July 24, 1380, by the sovereign of Aragon, prince Martí, Guillem Ramon de Montcada (†1398) and Enrico Rosso (†1386), the last two as representatives of the queen.

It had already been more than a year and a half since Guillem Ramon de Montcada managed to get the queen out of castle Ursino, where she had lived under the surveillance of Artal d’Alagó (DE MARTINO, 2013). It was January 23, 1379. But what seemed like a salvation turned out to be a terrible captivity. From Catania she was taken to Augusta. From Augusta she was led to Licata and, from there, back to Augusta. And, at last, the viscount of Rocabertí -under the orders of elCerimoniós-, evading the siege of Augusta, led the queen to Cagliari (Sardinia) in 1382. The time the queen spent in these besieged castles was of great hardship due to the lack of supplies and money that had to arrive from the Crown of Aragon. It is known that during the time she was at the castle of Cagliari, the governor of this city had to ask for economic and health assistance for queen Maria and the little personnel that was at her service. There the prison continued.

It will not be until the spring of 1386 that she was transferred to Mallorca and shortly after, she will arrive in Barcelona. But during all those years that she was under the direct tutelage of her grandfather-  – el Cerimoniós died in January 1387- and her future in-laws, Martí de Montblanc and Maria de Luna, the queen resided in Catalonia and she always had difficulties to maintain her house or court. In 1390, Pope Clement VII (Avignon, 1378-1394) granted her the matrimonial dispensation for getting married to the young infant Martí (1376-1409) (FODALE, 2008). At that time the bride was twice the boyfriend’s age, and el Cerimoniós had died a couple of years ago.

It was not until a year and a half after the papal dispensation that the couple sailed from Port Fangós (Tortosa) on the expedition financed by Martí de Montblanc. On March 22, 1392, they approached Favignana (Trapani). Their arrival had been previously negotiated and the barons had already sworn allegiance to the queen, but opposition to the two Martí. This conflict lasted until 1397, finishing with a bloody purge of the Ribelli and with the redistribution and division of the large extension of land owned by the Alagó and Chiaramonte, which passed to the Cabrera, the Montcada (Moncada), the Queralt, the Santa Pau, etc. (LOMBARDO, 2018). During this decade there will be continuous changes in the ownership of the old island baronies. It will be the colonization of the island by the newcomers and their allies.

From the moment that Martí l’Humà o el Vell had to leave the island in order to lead the Crown of Aragon after the death of his brother Joan (†1396), the government of Trinacria was led by Martí el Jove and a royal Council. The queen fell into a deep depression. During the months of her illness, she was cared for by the best apothecaries and doctors of her time (SANTORO, 2003). At the beginning of 1398, with a relative improvement of the queen, the young king was able to fulfill his matrimonial functions and, during the spring, it was confirmed that the queen was pregnant. That same year, they were accepted as monarchs: Maria I and Martí I of Sicily, but not crowned.

On November 17, 1398, a child was born whom queen Maria would name Frederic, after his Sicilian ancestors, but who would be baptized on Saint George’s day in 1399 in the Paradise chapel of castle Ursino with the name of Pere, according to Aragonese tradition. Once more, the queen’s wish was irrelevant. Those were a few months of happiness until they took the boy away from the royal chambers. The justification was that it was necessary to remove him from the maternal influence so that he could develop his personality (LO FORTE, 2003).

In strange circumstances that have never received a plausible explanation, on November 8, 1400, the boy died while he was with his parents. At the tombstone of the apse of the cathedral of Catania it’s named Fredericus. The child’s remains were claimed by his grandfather and, according to some authors, transferred to the monastery of Poblet (Catalonia). Fact that has been denied when opening the tomb of Frederic II(III) in 1958, since the bones of a three-year-old boy were found (REALE, 1983). On January 3, 1401, the people of Catania gave him a solemn service in the cathedral.

In the spring of 1401, the ravages that a new plague outbreak was causing in Catania forced the queen to move to Lentini castle. There, on May 18, all the symptoms of the plague were unleashed. The queen, who since the death of her son had entered a serious depressive state, never received a word of comfort from her husband, who, from Modica, was waiting the outcome. On Wednesday May 25, at two in the morning, ended the disastrous life of a queen who never knew how to escape the kidnapping of the Sicilian barons and the kings of Aragon harassment to her. On June 14 her father-in-law still did not know anything because he writes to his son talking about the bona sanita de la reyna and exhorting him to continue trying “en haver hereu e successors qui sien a honor gloria de nostre Senyor Deu e plaer e consolacio nostra” (LO FORTE, 2003).

Her body was provisionally buried in the Capuchin church of Lentini: Chiesa di S. Andrea e dell’Immacolata (SCOLARI 2011; PISANO, 1898), and later transferred to the cathedral of Catania near the reliquary of Saint Agate (1376) of Giovanni di Bartolo (†1404). This wonderful goldsmith work had reached the city when Maria had only recently become queen.

Possibly, the sarcophagus box with the image front of the Annunciation that is currently part of the tomb of Costanza de Aragón in the Cathedral of Catania was sculpted to be the tomb of Queen Maria of Sicily. I dare to say that it could be a commission from the knights (nobles) of the Empresa de la Corretja during 1397, when the queen suffered a serious health crisis (VILADOMIU, 2021), contradicting what I had previously stated.

Nowadays her remains are inside the sarcophagus of the king Frederic II(III), son of Pere el Gran d’Aragó in the Cappella della Madonna, along with her son and other relatives (REALE, 1983; VILADOMIU, 2009).

Copy of the tombstone of Queen Maria of Sicily in the church of San Francesco d’Assisi all’Immacolata a Lentini:

Inscription above the coat of arms of the Kingdom of Sicily (Photographic document: Soprintendenza di Catania Archivio Fotografico; cartella A.6.5. – AF SBCA CT; 1952). Right wall of the main apse of the cathedral of Catania. 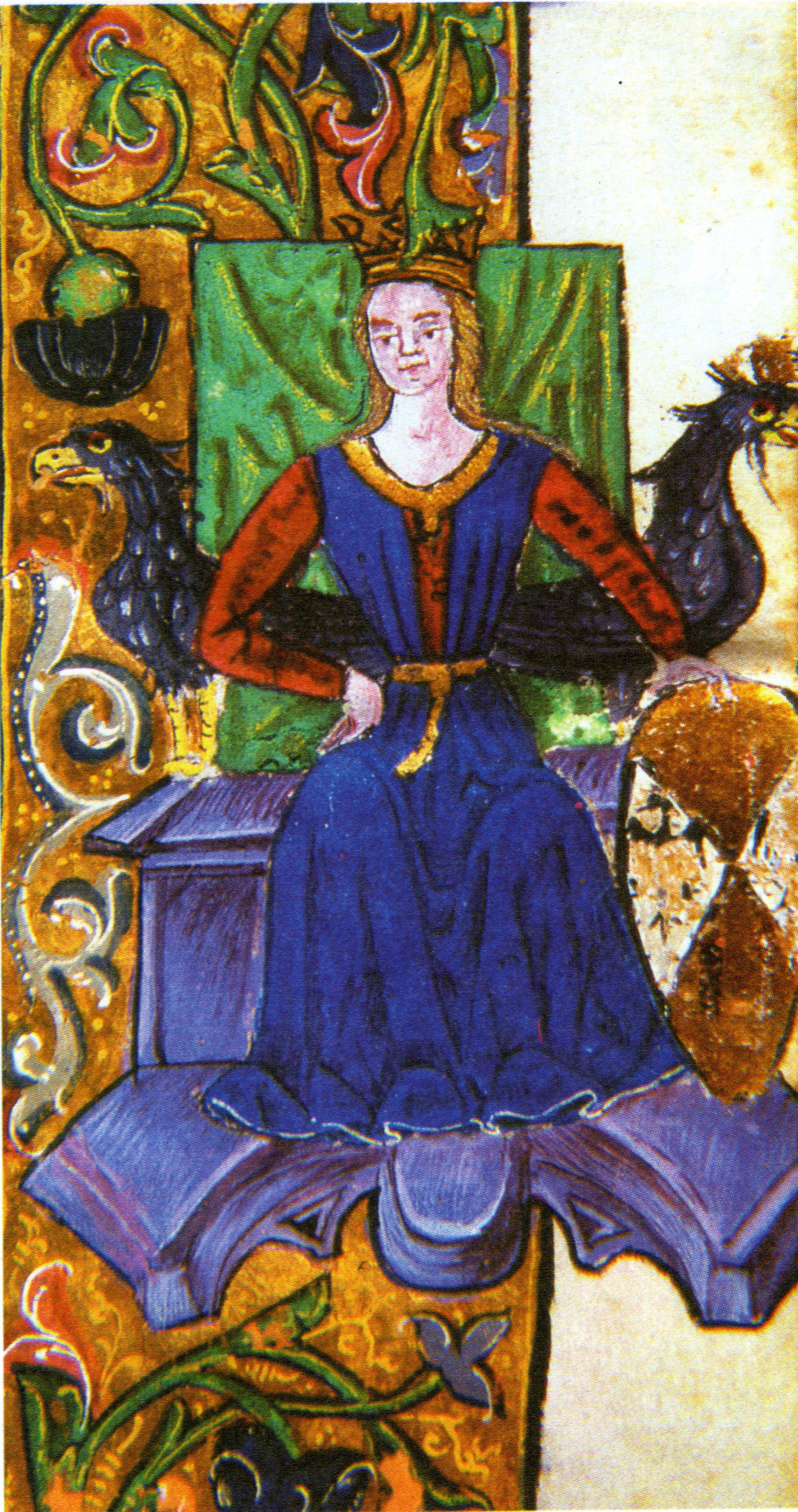 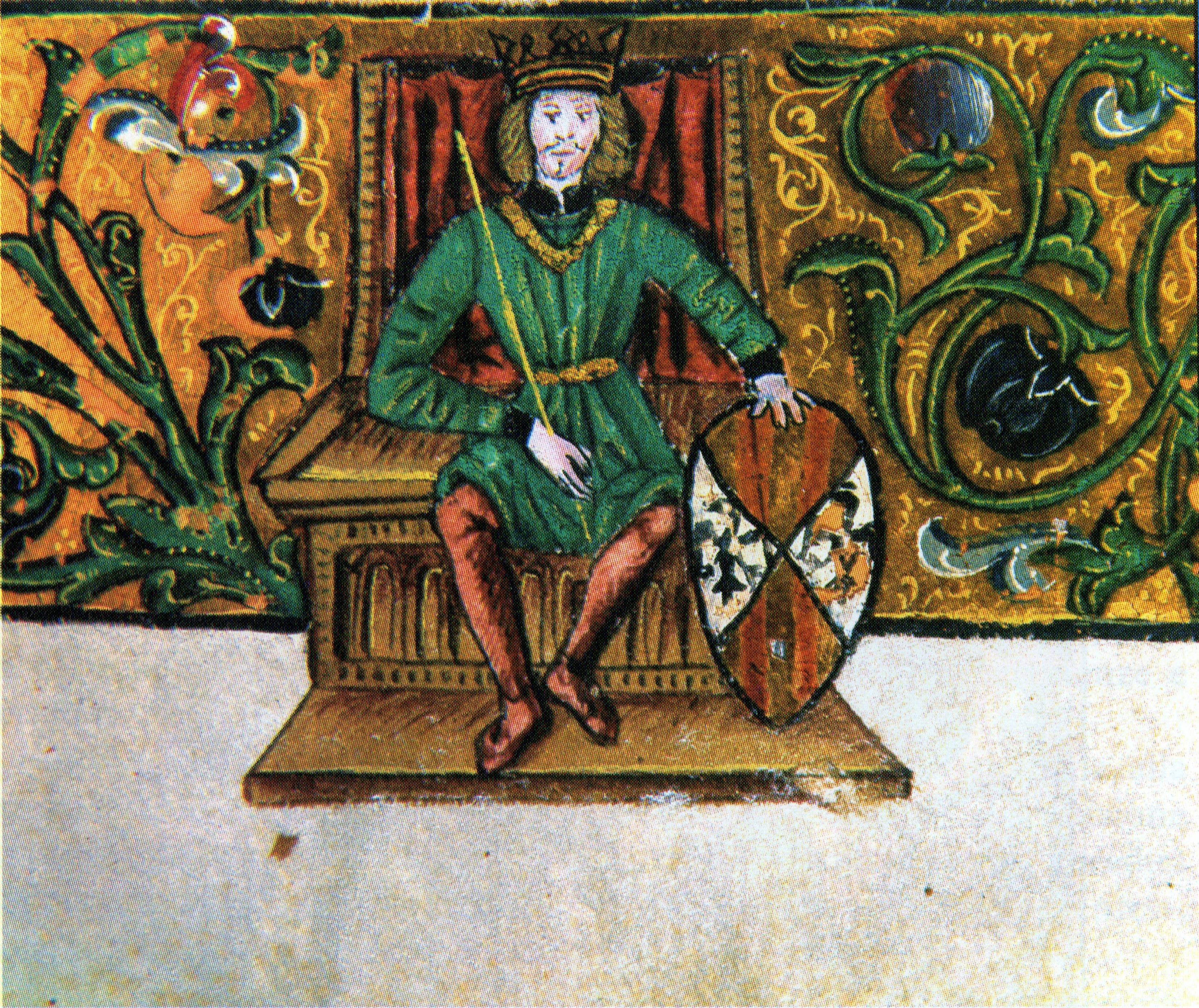 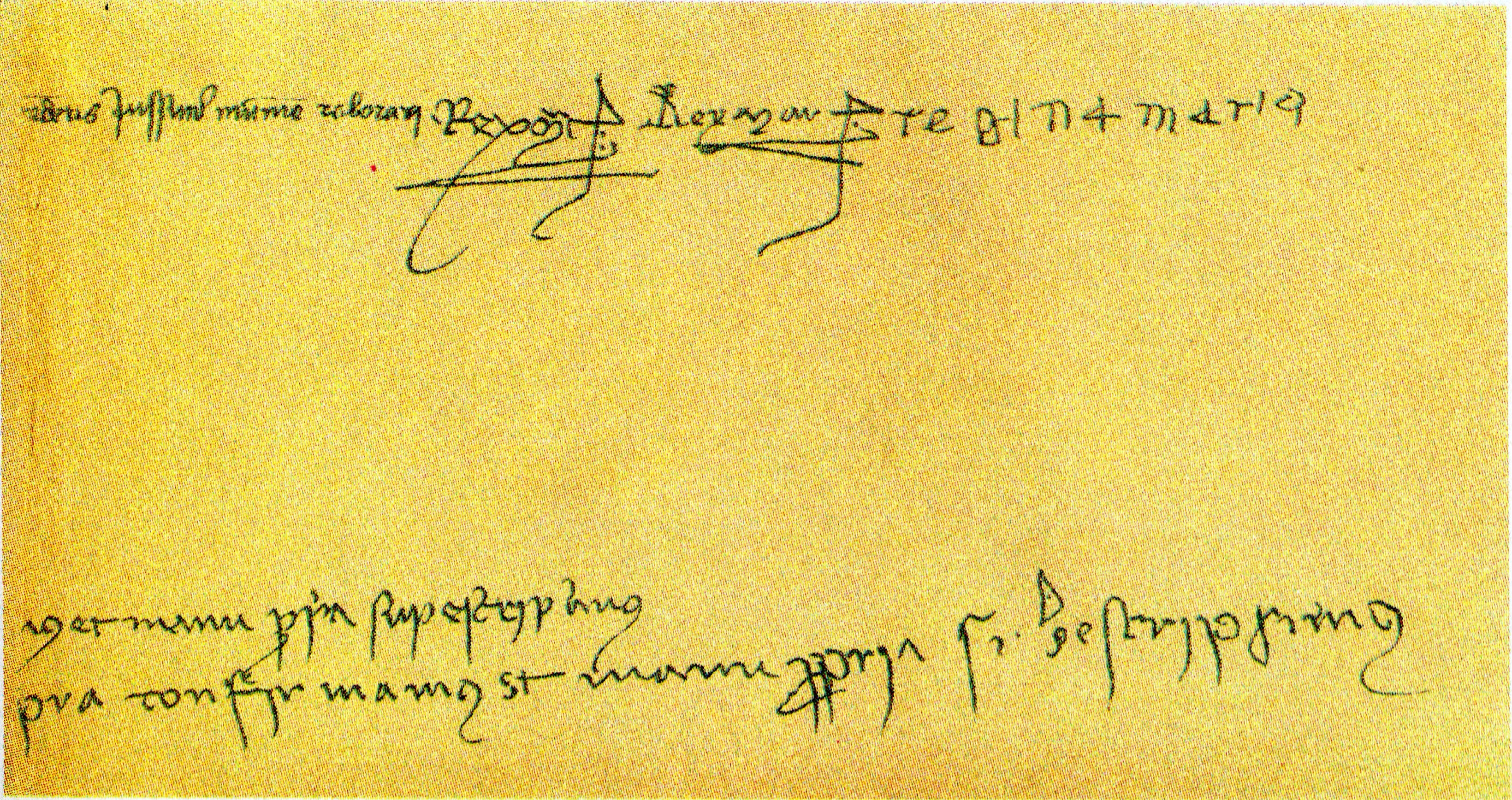