You are here: Home / Frankish-Catalan Sicily and Greece / Castaño, Mireia

Mireia Castaño has a degree in Art History from the Autonomous University of Barcelona (2015), where she obtained the “Premi Extraordinari al Grau”. She gained a Master in Medieval Studies from the University of Lleida (2016), with a dissertation on the relationship between the notions of Love and Games at the end of the medieval period, entitled Ars Ludendi. Los juegos de amor a finales de la Edad Media, under the direction of Dr. Eduardo Carrero. The essay, yet unpublished, proposes a new artistic interpretation for some festive, playful and gallant motifs, only examined before under a literary perspective.

She is working at present on her doctoral thesis, yet to be defined, in the Medieval Studies Department at the University of Geneva. Her research is framed in the “Certificat de Spécialisation en Études Médiévales”, an interdisciplinary training defined as a pre-doctoral year in which the researcher has to outline a thesis proposal and take part on some seminars. In the future, she intends to continue her PhD thesis at the same university.

She is a two-time recipient of a stipend from the Medieval Studies Centre at the University of Poitiers, in order to follow their Semaines d’Études Médiévales. She also took part in the translation of some articles from the “Enciclopedia del románico en Cataluña” promoted by the “Fundación Santa María la Real-Centro de Estudios del Románico”. She has recently published a biographical resume of a Catalan artist (Rafael Destorrents), available in Magistri Catalonie’s database.

She has conducted some conferences to give an introduction to her research, among which could be highlighted “Els colors del Romànic i del Gòtic”, taught at the University of Chicago (2016) or “Les jeux de mots à la fin du Moyen Âge” (2016), at the University of Geneva.

Her research is primarily focused on the role of the art object in the late medieval courts. For that reason she is preparing an article on the notion of Love Gifts at that period. Her academic interests are always in an intersection between Art History and Literature, always from the xiii to the xv centuries. 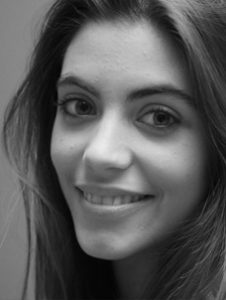